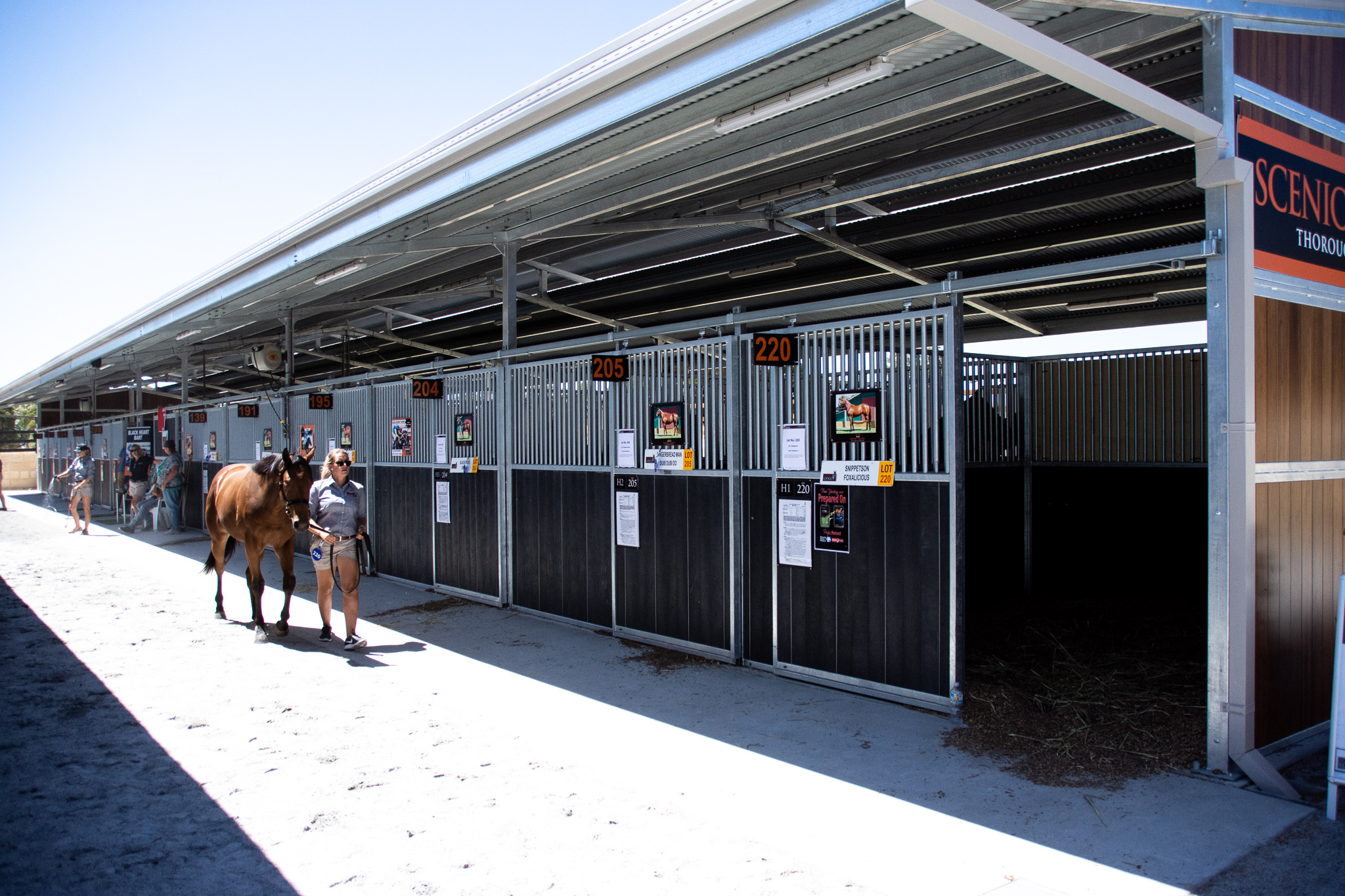 We’ve had some fantastic success with our stallions over the years, in particular, Scenic and Blackfriars, have made a huge impact in WA. One of our newer stallions, Universal Ruler, is a great story. We bred him ourselves and sold him as a yearling. He was by Scenic, who we were standing at the time. He had a great racing career, and it was nice to get him back to stand at stud as a son of Scenic. And, in fairness, he’s a horse that probably hasn’t had as many opportunities at stud, so we are just so proud of him, the way he has really stepped up without having that chance of high quality mares and big numbers. For him to have the year he’s had this year, becoming the WA Champion 2-year-old sire, is really fantastic, and a huge achievement. What’s more its great timing to have him proving himself as a leading sire, with the passing of Blackfriars earlier this year, and with his runners to winners performance we are really positive to have him coming through as a top stallion.

For us, he’s really appealing as he is WA bred and raced. People know Ruler, they’ve been able to see his career as a racehorse with their own eyes. He’s been successful on the tracks here and that’s a big thing to consider – breeding horses to suit the local environment. I think that’s why we had such great success with Blackfriars, as his progeny were tough horses, that were so well suited to the tracks and conditions here. And it is a big thing with stallions here, we see so many that come in that just fail to handle the conditions here. Our style of racing, tracks and conditions are quite different to that of the Eastern states, so breeding horses that suit WA is a focus for us, and that’s where we feel Ruler has really come into his own and has a lot to offer.

We’ve had some ups and downs this year, obviously the death of Blackfriars was a huge loss to us, and to WA racing. Fortunately, we have many well-bred mares by Blackfriars so that we can keep the bloodlines going. The great thing about Blackfriars, is that his mares cross so well with Universal Ruler and with Snippetson, and that’s one of the main reasons we looked to secure Snippetson, as he’s a great cross with Danehill line mares. He goes well with that bloodline and Snippeston is a really fast, speed type horse. He’s super tough and proven, and throws lovely types as well. So, without Blackfriars, we are fortunate to have two really commercial stallions on the farm. No disrespect to our other stallion, Dash For Cash, he’s a very consistent stallion in his own right – one of his yearlings made $100k at the sales a couple of years ago, so he still does a really good job.

Many people have asked us if we are going to replace Blackfriars, but with Ruler and Snippetson firing well we are pleased to support them going forward. It’s not quite that easy to replace a horse like Blackfriars, but if we look at Snippetson, taking Blackfriars out the mix, Snippetson is the leading active stallion in WA. So, we have him, and the emergence of Ruler over the last 12 months, proving that he is a real sire of repute, to support with our mares. The market is also quite tough to bring in new horses. We see many new stallions coming in and getting small books, and that makes it very difficult for the horse to make it as a sire, as it is a bit of a numbers game. If I think back to the early days, one of the best things that happened to boost Blackfriars breeding prospects, was that we leased Scenic back to the eastern states for a season. That meant Blackfriars got a huge book, and from there got some good runners on the track, which had a roll-on effect to him getting larger numbers, and better-quality mares.

We secured Snippetson from Widden. At that time, we were looking for another option to Blackfriars, as the market has been quite tough, and one thing that has been a frustration is that Blackfriars progeny have not always sold as well as they should, considering how dominant a stallion he was. That’s generally because they are horses that need a little bit of time, and the market generally seems to want those fast, early types of horses. With this in mind, we pinpointed Snippetson as a really good proven horse, but also a horse that produces that type – they are early runners are are excellent sales types of horses, so that gives us a nice mix in our draft.

It can be tricky to bring a horse into WA. We’d all like a Snitzel, but you have to be realistic about the market and what’s going to get the support. To find the right sort of proven horse is hard, as they must be doing a good job, but not quite at the ranking of the leading eastern states sires. Snippeston was just the perfect horse. He stood at Widden and had done a great job, but was always just under some of the others, and therefore not getting the support and the quality. But he just produces winners, I think last year he actually had more winners than Blackfriars, and this year he’s had around 90 individual winners again. Compare that to the next best in WA, which would be around the 40 individual winners, so he’s got a great track record. These winners are in the east, so the exciting thing with him, and we had a little bit of the same with Scenic, is that people are yet to see it with their own eyes. His first WA crop is going to be racing this current season. He’s covered some good books with nice mares, so we are really keen for the progeny to hit the track in WA, hopefully with a bang.

So, it is pretty exciting times for us with these two stallions. Snippetson himself, is such a character and a great worker. He’s is all business and knows his job, so he is great to handle with the mares. He’s got plenty of personality, so can be quite full-on sometimes, but he’s a great doer, with an excellent constitution, and absolutely nothing phases him. Ruler is a different character. He’s very laidback and can sometimes be a bit more shy with the mares, so takes his time. He’s more active and light on his feet. They’ve all got their little quirks, but they are both lovely natured horses, as with all our stallions, any of the girls can do anything with them and that comes through in their progeny, which is super important. Blackfriars was such a lovely horse around the farm, and all his progeny are genuine horses; they are not quirky, they give their best and they are good doers that can handle the training and always clean up their feed!

Breeding season is just cranking up here now. We have 2 Snippetson foals on the ground already and have some good numbers booked to the stallions. We will foal down about 70 mares, so it will be busy! Obviously, in our field, growing strong, correct and sound horses is vital and we pay carefull attention to the nutrition and health management of our mares and foals. The nutritional support of Michelle from Milne and KER is an important part of program. Looking forward to the sales, we’ll have a really nice mix. Fortunately, we will still have some Blackfriars to offer, and his last crop of foals will be on the ground this year. We expect demand for those yearlings to be high and will have some nice Snippetsons and Rulers to balance out the draft. Hopefully we’ll be down at the new sales complex by then!

Breeding has been in our family forever. The difference now is that we are a lot more commercial. We used to just breed for o...

I’ve always been involved in horses, but started my working life as a nurse.  Those skills have come in very handy now with w...

We’ve been in the breeding game for quite some time.  Sandra and I actually started breeding horses here on this farm in 1980...