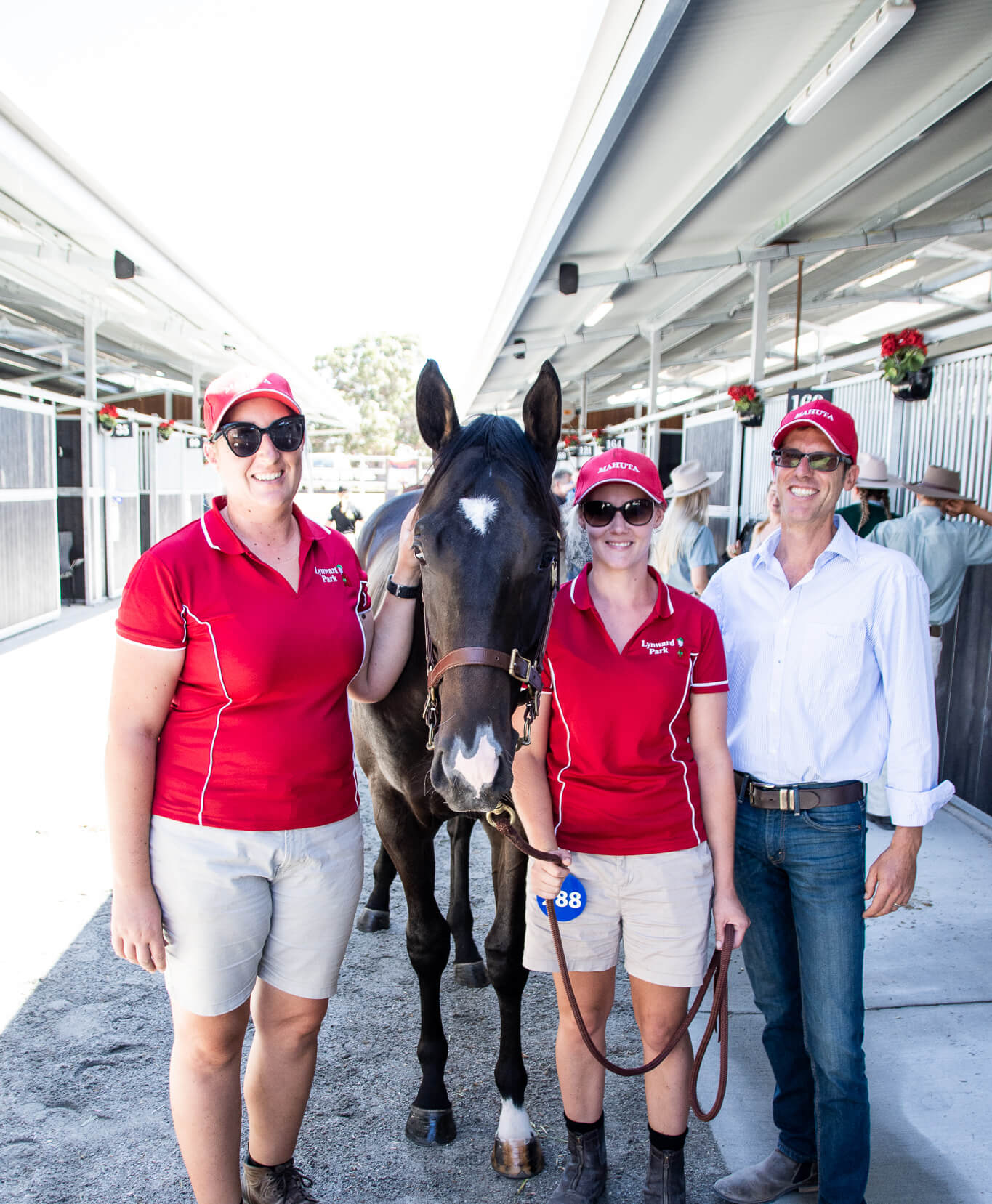 We’ve been standing top quality stallions on our farm for over 20 years. When it came time to look for a new stallion to join our breeding program we considered the options carefully, looking for one that was ideally suited to WA. We were on the hunt for a stallion to epitomise the Westspeed Platinum Scheme and justify that investment in the WA breeding industry has its rewards.

We identified Mahuta as the sprinter/miler that was needed over here. We were looking for an Australian horse with an Australian pedigree that would be relevant not only in the Perth sale but also on a national scale. So, we simply went and found the fastest, strongest horse we could and Mahuta was it. He’s the highest rated sprinter/miler here. After missing out on a couple of stallions that made their way to the Hunter valley, it was a bit of chance that we got him actually. We had some horses with Darren Weir and I was over there taking a look at them and Mahuta was in his 4 year old year and had a couple of injuries. It didn’t look like he would continue racing and the large ownership group really wanted to see him go to the good home he deserved. It was too late to get him into a stud over there and with Darren’s very strong recommendation, we snapped him up and brought him over here in the middle of July 2017. I remember Darren saying how tough the horse was maybe five times in five minutes. Darren and his team had the highest regard for the horse. He received good support in his first year considering the climate and timing…he just fits perfectly with our breeding program.

Over the years we have stood many great stallions here; Cheraw, Protos, Serheed, Dauberval and Bletchley Park, and whilst they were all excellent stallions in their own rights, we identified that WA needed an Australian horse with a national profile, and Mahuta was easily the best available choice.

This season will be his first crop of foals on the ground. We are really excited and can’t wait to see them. A lot of our clients are excited too and for that reason, we are holding an open day on Sept 9th. People can come and meet the stallions and see some of the early foals – everyone is welcome. We aim to create a fun, festive day and involve local businesses as well as supporting a relevant charity or organisation. This year we are supporting ‘Off the Track’. We’ll be doing auctions and raffles plus some great trade and information stalls. Details of the Open Day can be found on our facebook page.

It’s a great way for people to come and meet our horses, enjoy the farm and have a look around. It’s also a great day for us on the farm. We all really enjoy it too. Everyone who works Lynward Park takes a lot of pride in the farm and the horses and it’s rewarding for me to see them taking pride in their work and having a sense of ownership. We have a number of long term staff and we are all really committed to the WA industry. Mahuta has already attracted considerable Eastern States interest. Roll the Dice Racing, who sold us the horse have sent a mare over to him this year and they have flagged the Perth Sale to buy his yearlings. I’ve been approached by a number of past part-owners of Mahuta eager to invest in his stock. I look forward to having a few of them racing on the east coast as well as some racing in Mahuta’s colours with Darren Weir.

We have nine ourselves to foal down and all up we expect about 20 in the sale – enough to generate some interest and give them a chance to perform in a variety of stables. For our own racing and breeding program, we are fully committed to Mahuta. There’s no doubt he fits well into our breeding program, suiting the majority or the mares we own. We’ll be aiming to get his stock into as many top stables as we can all over the country. Our immediate goal is to turn this high-quality, well-bred horse into an accessible asset for all breeders in our state.

What I like about him the most, personality wise, it that he’s just a lad. He takes everything in his stride, has an exceptional temperament and is very laid back. I haven’t seen him worry for a moment about anything, which makes him easy to work with. The other great thing is his constitution, he just eats everything we put in his feed bin. He’s very focused on his tucker! Physically, I just love that he’s got so much strength. He is a well-made, balanced horse with good bone and muscle. His racing characteristics are well suited to WA. He had tactical pace, a high cruising speed and he would find another gear at the end of his races. He was a good strong sprinter that could get up to a mile at Group 2 level and be Group 1 placed over 1400m. To be honest he just suits our style of racing. If his stock have his temperament and constitution, as we can reasonable expect them to, then the trainers will love them. He’s exceptionally stoic and tough, which makes him ideally suited to our racing conditions here. We say that with confidence as in his first prep, which lasted 9 months, he went from a Maiden winner to a multiple Group 2 winner, with 6 unbeaten runs; he travelled far and wide, carried big weights, raced wide and even when given every excuse in the book, never used any of them. In doing so, he beat 15 individual G1 winners. He has a great pedigree as well. We weren’t looking to reinvent the wheel with an exotic pedigree. The Danehill/Zabeel cross has been dominant in Australian racing for more than a decade. Without doubt he has all the qualities needed to make it as a stallion.

What I’ve found over the years in breeding and rearing horses is that all the horses do differently in terms of how you handle them, grow them, and feed them. We try and tailor our feeding program accordingly, and that’s where the nutritional support of Milne Feeds plays a big role. Michelle from Milne’s has been in the business for a long time and really knows her stuff. She has been a great asset to us. We fine tune our yearling prep diets to suit the type and breed of the horses in our draft, and we also apply the same logic on farm. For example, the Alfred Nobel’s were tall, leaner types that we were able to fill the frame, while the Bletchley Park’s were good doing types that we had to feed accordingly. Either way, providing correct nutrition for sound growth throughout gestation, right through weaning, and on to yearling prep is very important to us at the farm. We think it is an essential part of a successful program and we have peace of mind knowing that side of things is taken care of in our Studmaster pellet. We also have a good pasture plan in place and grow our own hay on farm.

I have no doubt one of the keys to producing elite performance horses, is breeding horses with sound growth and constitution. They need the temperament to handle different and stressful conditions so they can eat up when the pressure goes on. Let’s face it, every trainer feeds and trains differently, and so having horses in their stable that clean out the feed bin during times of intense exercise load, makes everyone’s job much easier. The constitution, physique and temperament of Mahuta fits the bill that trainers look for.

Breeding has been in our family forever. The difference now is that we are a lot more commercial. We used to just breed for o...

I’ve always been involved in horses, but started my working life as a nurse.  Those skills have come in very handy now with w...

We’ve been in the breeding game for quite some time.  Sandra and I actually started breeding horses here on this farm in 1980...